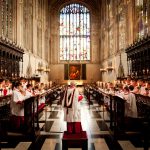 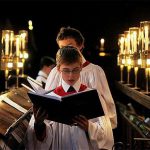 When that silvery solo voice fills the chapel with “Once in Royal David’s City…,” my Christmas truly has begun.  I’ve been shopping and decorating and menu planning for weeks, but none of that fills my heart and soul with joy in the same way as the candlelight carol service in this country.

I grew up in a big California church with big programs.  Christmas was an extravaganza that was planned all year long.  It featured a singing Christmas tree, theatrical costumes, and marching toy soldiers.  Somewhere in there, we were meant to be overawed by the “real meaning” of Christmas.

In contrast to singing Christmas trees were my school Christmas pageants.  They were more the real deal.  I look back on these with much fondness.  I loved the rehearsing and preparation for this annual event.  Because I went to a Baptist day school, important programs like the Christmas pageant were always held in the main church sanctuary.  As a child, this was an immense and awe-inspiring building to me.  The baptistry soared high above the choir, and every year, three sixth-grade girls (never boys!) were chosen to proclaim the good news as angels from this lofty pinnacle.  It was indeed the pinnacle of honour to be selected and as a sixth grader, I was one of the chosen.  It meant I got to wear a white robe and enormous, sparkling wings.  We were a dazzling sight up there in the baptistry, heady stuff for three 11-year old girls.

In one of our final dress rehearsals,  we were waiting for our cue in a small side room next to the baptristy.  Back in those days, we were just sent up there without any supervision.  Imagine!  There was a window in that room that opened onto the roof of the sanctuary, and as this was an irresistible opportunity, we three angels climbed out and began running around and flapping our wings at the traffic down below.  Car horns honked and people stared up at us as we joyfully shouted, “Glory to God in the highest!  Peace on earth, goodwill to men!”

It was exhilarating until Mrs. Kenison suddenly appeared at the window.  We were doomed!  She nearly demoted us to the choir, but thankfully, we got to keep our angel status.  Somehow, that rooftop experience liberated our hearts and voices so that we proclaimed the glory of God like never before.

There was nothing restrained about that first Christmas carol.  The angels must have sung with wild abandon to those awestruck shepherds huddled around a campfire on a darkened hillside.  The windows of heaven were flung open, and yet they were its only audience.  All of Israel was looking for the spectacle of a coming king, but they missed it because of what they weren’t looking for.

Americans tend to look for the entertainment value of big church Christmas programs; in England, it’s about beauty.  Ancient churches and cathedrals are never more beautiful than they are at Christmas time, resounding with the music of pipe organs and choristers surrounded by the glow of candlelight.  Nowhere in the world is this beauty more perfected than on Christmas Eve in King’s College Chapel.  It was here that the tradition of the “Nine Lessons and Carols” began in 1918, just after the horrors of the Great War had finally ended.  It has since been adopted by churches across England and the world as the standard for all Anglican carol services.

The first carol is always “Once in Royal David’s City”with the first verse sung as a solo by a chorister as he comes down the aisle.  The congregation stands and responds by joining in on the second verse.  The program then follows readings from Scripture that chart God’s plan for salvation from Adam’s fall in Genesis to the prophecies of the Old Testament through to the birth of Jesus Christ.  Each reading is followed by a carol sung by either the choir and/or congregation, culminating in the final “Hark the Herald Angels Sing.”

I am never unmoved by this Christmas service which I have attended at various churches and chapels here in the UK.  There is beauty and glory in abundance, but there is also simplicity in its order.  It is a collaborative celebration where the congregation is there to participate, not just spectate.  It is a journey we are all invited to take back to Bethlehem through long, dark nights of history, war, and doubt.  We are invited to wonder and consider why this celebration of the Christmas story still draws us.

For me, the draw of the Nine Lessons and Carols is the liberation of joy that comes through that first congregational response to the solo verse of “Once in Royal David’s City.”  I am reminded once again of what Christmas is meant to be, a response to God’s solo gift “in a lowly cattle shed.”  The carol is uniquely English, based on a children’s poem.  We are reminded through the following verses of the weakness of childhood, and by singing it with a child, admit to our own ongoing weakness and need of a Saviour.  By the outgoing carol, however, I have taken the journey from darkness into light and I am once again out on the rooftop, where angels should be, praising God and singing,

Christ is born in Bethlehem

‘Glory to the newborn King!'”

One response to “Carols by Candlelight”