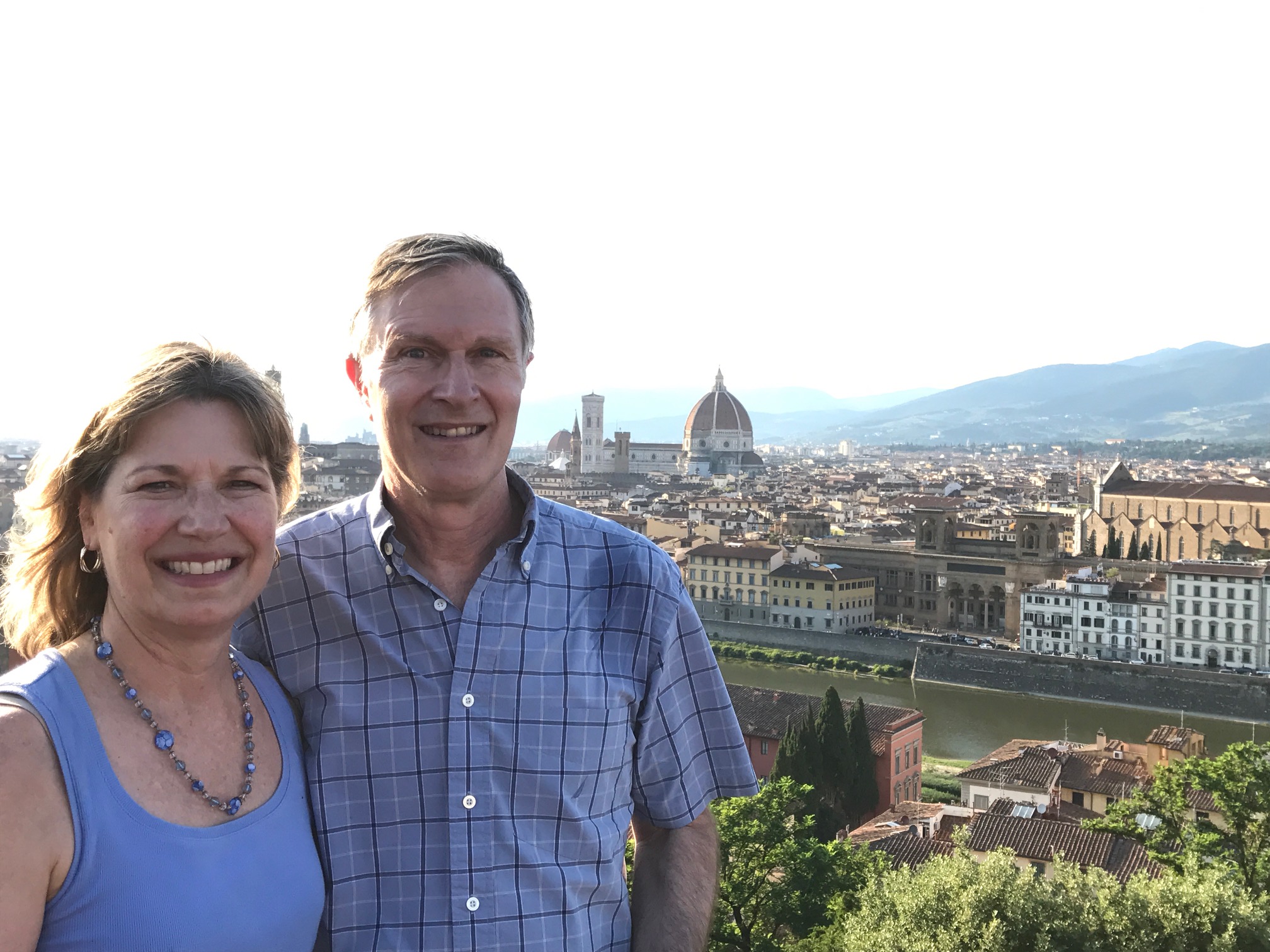 The English have had an undying love affair with Italy for centuries, and in particular, Florence.  They are drawn to its warmth, the golden hues of its palazzos and countryside, and the culture and easy charm of the people who know how to savour life like a fine wine.  But there’s also something transformative about Italy that changes one’s perspective.  One of my favourite authors, E.M. Forster, describes this transformation so deftly in A Room with a View when Lucy Honeychurch comes back from Florence and tells her emotionally repressed fiancee, Cecil Vyse (such perfect names!), that she thinks of him as always being in a room, but one with no view.  In Florence, she’s given a room with a view, literally as well as figuratively through her encounter with George Emerson, a man who is unafraid to love her.

I first went to Florence on a high school tour in the summer of 1973.  I was sixteen years old, experiencing Europe for the first time, and rather overwhelmed by it all.  How do you even begin to take it all in at that age when your world has been so small in comparison?  What I remember most vividly about our brief stop in Florence was this iconic view of the city and its magnificent domed cathedral while eating watermelon at the top of the Piazza Michelangelo.  Forty-four years later, I am seeing it for the second time, and proud to say I hiked up there!  I was disappointed that the watermelon stand was gone.  Now, there are hordes of tourists up there, hundreds with their selfie sticks, and kiosks selling souvenirs and lukewarm drinks at inflated prices.   We escaped the sunset crowd by climbing further up the hillside to San Miniato, a medieval church and monastery that sells its own honey and homemade peach preserves from a little shop tucked underneath a bower of jasmine.  The tourists may have taken over Florence, but the views are still astounding.  It is a view that follows the Arno down through the centuries and expands in so many ways.  This city, above all others, reminds me how much love opens the window of our souls.  Not in a romantic cliche kind of way, but love that is sacrificial, life-giving, extravagant beyond all reason.

At the heart of Florence, of course, is the Renaissance.  People come to see what lies at the centre of the view, when artists like Michelangelo and Botticelli strove to define both the human and the divine through sculpture and painting, and an architect named Brunelleschi designed the greatest of Europe’s cathedral domes, called simply The Duomo.  When Michelangelo sculpted the David,  he was only in his twenties.  He took an abandoned block of marble which had been partially carved then rejected as inferior, and he loved it.  He gave himself to it, chiselling such beauty and perfection into it that no one who sees it can doubt the mastery of its creator.  There are imitations of it everywhere in the world so that it has sadly lost its mystery.  Love has many counterfeits that obscure one’s view without knowing it.  Until you see the real thing and understand the difference.

For me, though, the view of the David was not complete without seeing Michelangelo’s unfinished Nicodemus Pieta displayed in its own room in the Opera Museo opposite the Duomo.  Now a museum, it was once Michelangelo’s workshop.  There are no great crowds there, and yet I found it the most moving of his works.  It was carved when he was old and nearing death and he meant for it to be placed on his own tomb.  The figure of Nicodemus bears Michelangelo’s own face looking down on the body of Christ being held in Mary’s arms.  It was meant to reflect his love for Christ which had come to mean everything to him at the end of his life.  In frustration, whether through diminished ability or his own spiritual conflict reconciling his love of art with love of his Saviour, he gave up on it and even tried to destroy it.  In one of his many sonnets, On the Brink of Death, which is written on a gold plate opposite the statue, he wrote these words:

“…Let neither painting nor carving any longer calm my soul turned to that divine Love         Who to embrace us opened His arms upon the cross.”

Love is a room with a view that allows us to see not only beyond ourselves, but the light that exists behind it all.  Love always opens us up to see beyond the counterfeit to what is real.  We are all that half-chiselled block of marble in need of a master who knows what we are capable of becoming.  The love of Christ is so profound in His understanding of us that in the end, not even Michelangelo could portray it.  He could only worship and love back.  It is an extravagant love, costly beyond all measure.  No one could make it up.  The greatest artists in history could only try to imitate it.   The view is meant to stretch to eternity.

I wonder what 21st century creations are being made to stretch that far?  How has so much passion and glory and awe been lost in what is created and built today to reflect that extravagance?  Perhaps, instead of asking for a room with a view, we settle for the gilt trappings instead.  On another hilltop outside Florence is the small town of Fiesole.  There is an old Franciscan monastery there founded after the Order of St. Francis of Assisi, a young nobleman who gave up his wealth to serve God.  You can see the tiny rooms where the monks used to sleep and the beautiful little church and garden where they still worship today.  There is a simple peace and quiet about the place.  But the view takes your breath away.  You can see all of Florence with its red-tiled roofs and the Duomo rising up towards heaven in the centre of this ethereal city.  Beyond the city are the Tuscan hills which embrace her, covered in a lush paradise of vineyards and olive groves.  It is an eternal view that begins with a garden and ends with a city, stretching through the extravagance of love.

Is it possible to both create and love the Creator?  Did Michelangelo feel he couldn’t do both, that the eternal view didn’t stretch that far?  I think St. Francis put it best,

6 responses to “Florence–A Room with a View”