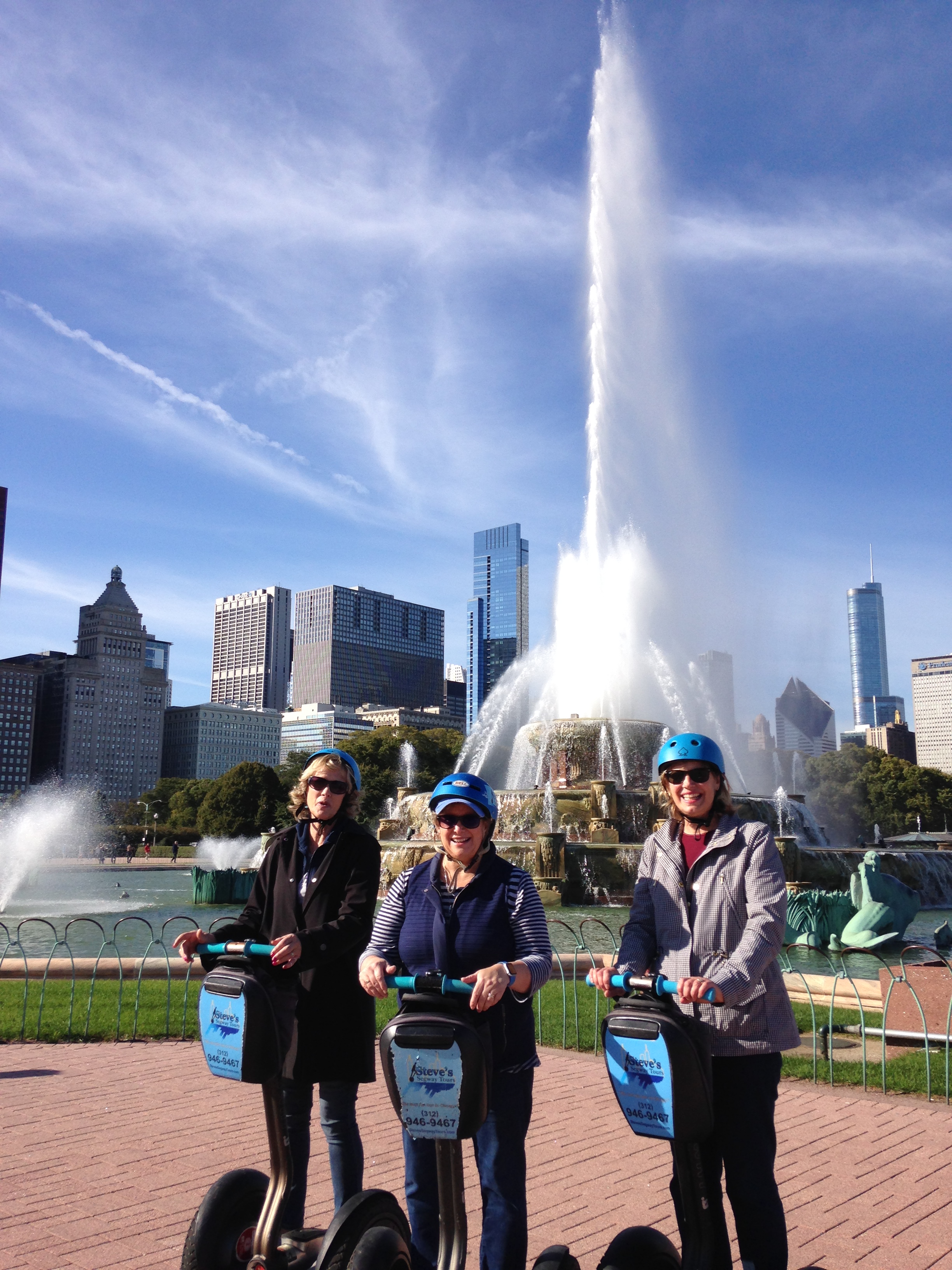 Everything begins for me in Chicago–that great big sprawling grid of a town so fantastic in scope, they call it “Chicagoland”.  It’s the Emerald City of Oz set somewhere beyond the cornfields and over the rainbow like a fabulous pendant jewel on the necklace of Great Lake Michigan.  It is the city of my birth, my crazy college years and dream-filled single years.  I published three books here, became a Chicago-based flight attendant, and met my husband who proposed in front of Buckingham Fountain.  It is a city that has aged not just gracefully, but spectacularly.  She has never looked better.  Not only that, she has the hottest World Series contender EVER, the Chicago Cubs!

So, when the busy lives of three sixty-year old women happened to converge by sheer divine appointment after ending their remarkable college careers as “The Three Musketeer-ettes” some forty years previously, it could only be in Chicago.  We incorrigible three, who shall be called Annathos, Doerthos, and JeanCaramis, (formerly known as Annie Lou, Donna Lee, and Jean Carol) were legendary, after all.  Instead of swords, we brandished cigars, gangster-style, on our late night raids of Poppin’ Fresh.  We didn’t quaff alcoholic beverages, thank goodness, but we reigned supreme as queens of the dining hall.  The laughter around those tables was extraordinary.  The tales with which Doerthos regaled us had us hanging limp over our chairs.  Like the time she accidentally anaesthetised her vocal chords with sunburn spray while on choir tour and could only sing like an android Martian.  Then, there was my famous birthday when a violinist showed up at our table, started playing Blue Danube, and my number one crush came over and waltzed me around the entire dining room in front of hundreds of bewildered and bemused students.  Doerthos had spent hours teaching the guy how to get it right so he didn’t step on my toes!  I am still laughing.  In fact, it was laughter that defined us.  We were so different from one another, but it was the laughter that ignited and unified us.

So, here we are, forty years on, and just look at us!  We are now the Segway Queens of America!  Our quest for the eternal fountain of laughter still knows no bounds as we circumnavigate the Chicago Lakefront.  Before we even start, though, Doerthos pirouettes off her Segway steed in an attempt to dismount and crashes to the ground!  The riderless Segway takes off in the opposite direction.  Oh my word, is that ankle swollen?  Never mind the ankle, what about the hip??!

But Doerthos rallies to our cries as we pull her to her feet.  We are all for one, and one for all! Nothing could be truer as she grabs hold of her mighty runaway Segway and once more joins our fearless band as The Three Musketeer-ettes ride off into the Chicago sunshine.  Look out world, we’re back!

There is much to celebrate after forty years of lives lived in separate places and separate worlds.  These two have taught me much about enduring friendship.  The laughter plays a huge part, certainly, but beyond that is love that forgives one another’s faults and foibles, even when excessive!  It doesn’t bear grudges or keep score; it sees all sides of your character and still wants to be your friend, anyways.  A true friend loves you for who you are, not for what you do or give in return.  True friendship is honest and transparent when it needs to be, but seeks the other’s interests and feelings as more important than one’s own.

Youth, of course, is a tie that binds you in  history when there is more past to your life than future.  With friends who once played and stood beside you on the brink of life and the world, you are always young.  You may be creaking at the hinges, which always comes as a bit of a shock, but forty years on you look at each other and think, “Our mothers never behaved like this when they were sixty!”

Thus, around the eternal fountain of youth we ride on!  Forever 21 is now a store frequently shopped in by my daughter and her generation.  But we Three Musketeer-ettes are still living in that glory–at least for one brilliant, flawless day in Chicago.  When Annathos/Annie Lou turned twenty-one, we kidnapped her from that bastion of guarded femininity, Williston Hall, and plunged her smack into a party room in which every guy she’d ever had a crush on was in attendance (she eventually married one of them).  Maybe a Segway tour of the Chicago lakefront at sixty-one doesn’t carry quite the same impact as a room full of twenty-one year old hunks singing “Happy Birthday” to you.  But fellow Musketeer-ettes, we still rock!  We have taken this gift called life by the horns and launched ourselves through both sunshine and shadows.  There have been deep valleys for all of us which we never anticipated, but also great heights of joy.  There have been great gaps of time across the years when our paths ran parallel without ever crossing.  But here we are–again!  Friendship is always about sweet discovery.

I am back in Cambridge now, in a country I never dreamed I’d live in.  Life seems so surreal at times when you suddenly find yourself transported back in time for a brief moment, then fast-forwarded back to a place that has had no making of you.  Time machines really exist, it seems.  But although the past may be a beloved country, it’s not the one you inhabit.  You can never go back and live there again.  We all belong to something greater than our past that pulls and moves us forward.  What remains, though, is friendship.  It  crosses the boundaries of time and distance, and renews the best in us.

Thank you, my beloved Musketeer-ettes, for a perfect day under bright blue skies in a place I once called home.  You will always gladden my heart.  To God be the glory….and to the Cubs–the World Series!