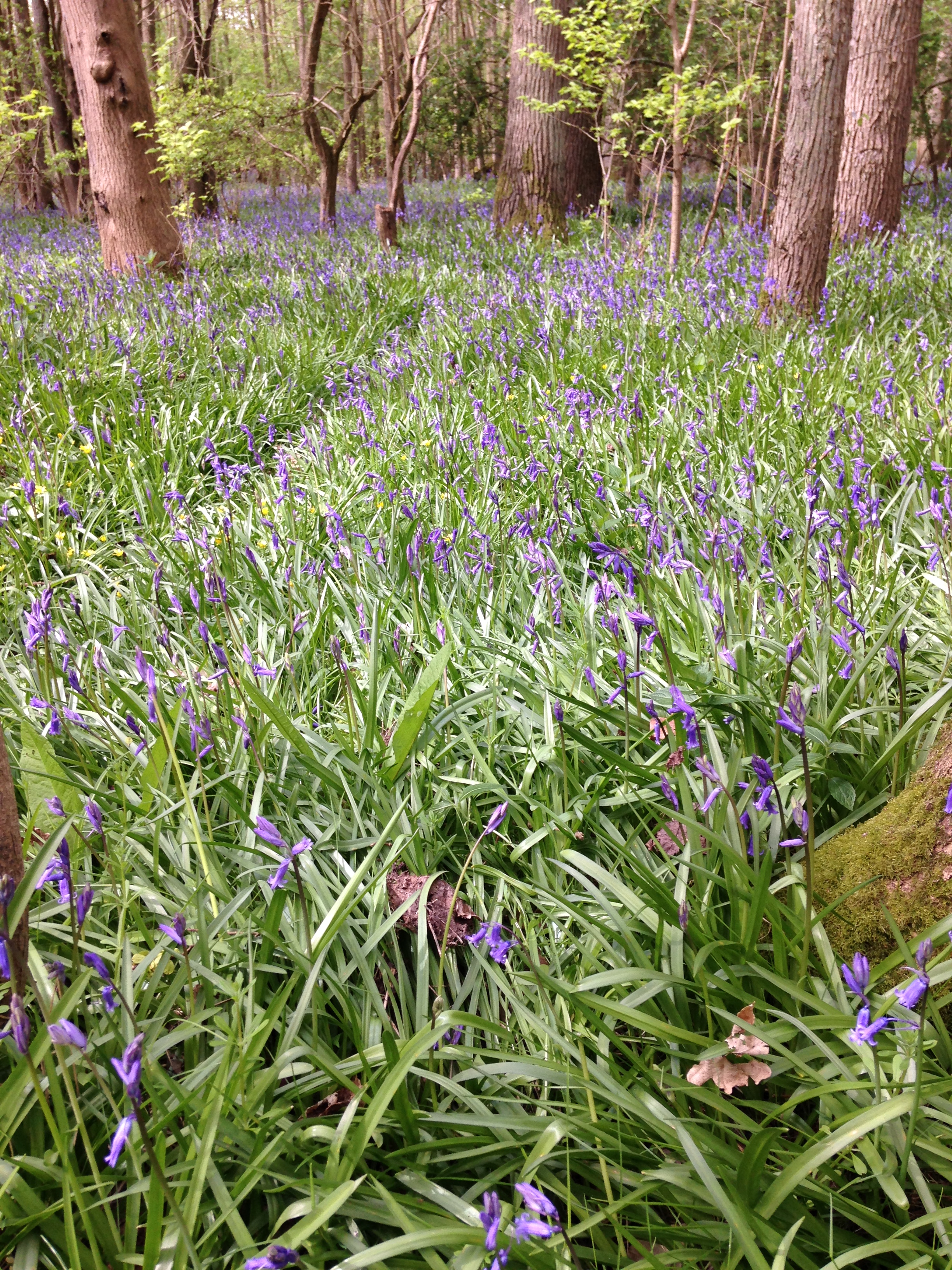 One of the constant delights for me about living in England are the hidden treasures one can regularly discover here.  There are no blaring billboards to direct you every five miles as to where they are, so I often get lost in pursuit of them.  But I don’t mind getting lost because that’s often when I discover such treasures.

It usually involves a sudden twist in the path, and there it is–something that catches your breath, makes you gasp out loud, “Oh, look!”  It often happens in a garden with an unexpected herbaceous border bursting gloriously full of colour as you come around a high hedge.  Or else, it’s a stunning vista, discovered by taking an untrodden path instead of the main road.  Sometimes, it’s just a moment when you are looking up at the sky perhaps, and a swan comes gliding in over the river, the water tinged with gold from the sun on a silky summer evening that seems eternal.

This week I discovered bluebells in Gransden Wood, not far from Cambridge.  I had heard of this spring phenomenon and seen many pictures of them.  After living in this country for over twenty years, I had never seen them.  But then, I didn’t go looking.  My friend Caro suggested the walk and I eagerly agreed.  The best discoveries are always made either alone or with just one other person, never a crowd.  She took me along a country path until we reached one of those nearly invisible passageways at the edge of the woods that only local people use.  In an instant, we were in fairyland.  Swathes of bluebells stretched across the woodland floor for as far as we could see.  It wasn’t just a patch here and there.  It was an entire sea of blue and green undulating waves throughout the trees.  So much beauty and majesty, and we had it all to ourselves!  Or, so we thought.

Suddenly, out of the blue, quite literally, a big wet dog bounded towards us.  Like most bounding wet dogs headed your way, the intention is to eagerly shower you with a vigorous shake and greet.

“Whoa!  Somebody’s been in the water,” I said, preparing to dive off into the bluebells.

“So have I!” answered the smiling boy in dark glasses who was following him with a long white stick.  He was blind and was accompanied by his mother.  The dog didn’t shake after all, but on hearing the boy’s voice, obediently stopped and waited for him.

It was an extraordinary encounter, this heavenly vision of blue all around us, and a young boy’s inability to see it.  Yet, the joy on his face was unmistakable.  He was experiencing what was hidden from him in other ways.  He could still feel the warmth of the sun filtering through the tree canopy and the wetness of his dog from playing in the stream.  He could no doubt hear the woodland birds calling to each other and smell the spring scent of earth and wildflower.

How much remains hidden from us just because we can’t see a thing clearly?  We can’t see beyond our troubles and difficulties, and so we give up on joy altogether.

Today is Good Friday and I am struck by the “hiddenness” of Easter Sunday from Jesus’ disciples.  Jesus’ body was hidden and sealed away in a garden tomb while the disciples themselves hid away in despair in a locked room.  As far as they were concerned, it was over.  The joy of what they had in Christ was gone and there was no future.  Even when the seal was broken and the tomb nothing but an empty, gaping hole, nobody knew what to think because nobody was looking, nobody had listened.

What does your heart search for?  Like the disciples, I search too much for what I’ve lost and what is past.  I need this “hidden” message of Easter–“Why do you look for the living among the dead?  He is not here; he has risen!”

The hidden joys of nature continually point me towards resurrection.  Keep looking…

“I once was lost, but now am found;

2 responses to “In Search of Bluebells”