How do you face fear?

I fear spiders. Funny noises in the house at night. Something bad happening to my children. Failure.

I don’t face any of these fears particularly well. Especially spiders.

But where I really fall down, literally fall to my knees from complete terror, is in my fear of crossing tall bridges. What is that even called? Bridgaphobia? 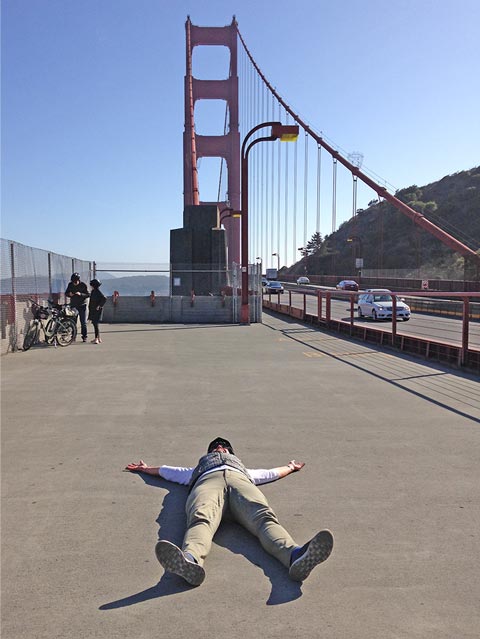 I’m sure this phobia of mine is closely related to my fear of heights. The fear of heights is essentially the fear of falling from them. I am an acrophobe. I do not stand on the edge of a mountain cliff and look down, for example. To me, that is pure craziness.

I went up in a hot air balloon once when I was young and crazy. As we went higher and higher, I thought I was going to dissolve into thin air. Maybe that’s where it all started. My fear was so acute, all I could do was promise God that if He would bring me down from that lofty suspended basket, I would never do anything so foolhardy again.

Age definitely has a lot to do with it. So does having children. Something changes in your brain once you have them. Your equilibrium goes out the window. Or mine did anyway. The first (and only) time I tried doing a somersault with my toddler, I thought I was going to faint. Jumping on a trampoline with my kids? Never again. Roller coasters? Are you kidding?

All that to say, I face vertigo and dizziness by staying close to the ground.

Sometimes, though, you have to face the mountain of your fears.

My greatest hour of reckoning came several years ago when my children were young. We were visiting friends in Denmark and decided to make a side trip to Odense, the birthplace of Hans Christian Andersen. Denmark is made up of many islands and to get from one to another requires driving over bridges.

The bridge to Odense on the island of Fyn went up into the clouds.

I gasped. I had never seen such a gigantic, soaring, heaven-minded bridge. The celestial monster just went up and up like something out of one of Hans Christian Andersen’s fairy tales. I couldn’t even see the other side of it.

I slowed the car down as my heartbeat picked up speed. Panic-stricken, I pulled over to the side of the road in front of the tollbooth. I couldn’t do this. I just couldn’t drive over that thing.

In need of moral support, I got out of the car and went up to the lady in the tollbooth.

“Excuse me,” I said brightly, trying not to sound like a panicked driver with a fear of tall bridges, “but is it windy up there?”

I love the Danish. They are the most cheerful, smiling people I have ever met.

The lady in the tollbooth smiled warmly at me as if I’d just asked her for her favorite recipe. “Let me call the man on the bridge. He’ll know.”

“There’s a man on the bridge?”

“Yes. He’ll have the wind report.”

A wind report? That was actually someone’s job—to sit high up in a tower on top of a bridge and report the wind?

The lady called and talked to the man on the bridge.

“Not too bad?” What did that mean? It was time to confess. “You see, I have this fear of bridges. But I’ve never seen anything like this one.”

I wonder if she was used to calming nervous people. Her reassurance got me back into the car, and we pressed on. But as we inched our way up the middle lane with cars zipping past us, the babes in the back seat sensed my acute anxiety.

And singing loud enough so the angels could hear, we crossed the bridge.

Make no mistake. I am still terrified of tall bridges. They collapse and people fall off of them and die. My fear is firmly rooted in that fact. But sometimes you have tall bridges to cross if you’re going to get to the other side of your fear. 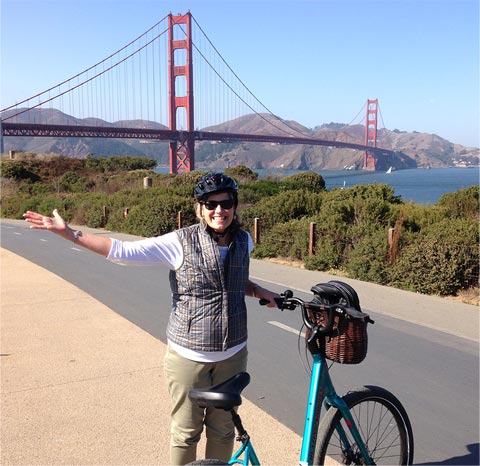 On my recent trip to San Francisco with my husband, I decided to go for a bike ride while he was attending his medical convention. The weather was beautiful and there is nothing I like better than riding bikes in the sunshine. Only, this was not going to be any ordinary bike ride.

I was going to “Bike the Bridge.” The Golden Gate Bridge. Probably the most iconic bridge in the world. Everywhere I went, I kept seeing ads urging me to “Bike the Bridge.” A guide would take me and a group of other happy cyclists. We would get to see San Francisco in a unique and active way. I had done a similar bike tour of Paris and loved it.

Okay, I thought. I can do this.

My group consisted of our friendly guide, Justin; a man on an electric bike; a gray-haired woman ten years older than me; her mentally challenged adult grandson, and me. If they could all Bike the Bridge, surely I could, too. We would do it together. So, off we biked into the exhilarating glory of the day.

There are hills in San Francisco. Steep doesn’t begin to describe them. But Justin in his friendly, confident manner reassured us we could take them on. We did, but the last hill up to the Bridge had me gasping. Maybe an electric bike wasn’t such a bad idea after all.

Too late for that. It was time to Bike the Bridge.

My heart sank. The Golden Gate Bridge, which is actually painted a reddish orange, stretched majestically out before us over the San Francisco Bay. The beauty of this man-made wonder is breathtaking. So is the height of it.

What was I thinking?

“Justin,” I said as we stood admiring the incredible view, “I need to tell you that I am terrified of bridges.”

Justin nodded. “Face your fear. That’s the best way to deal with it. I know. I have social anxiety. Someone once told me fear is the same kind of emotion as excitement. It all depends on how you look at it.”

True. Nothing focuses the mind like fear. Or excitement. They are two sides of the same coin. Flip the fear side of the coin and you have more than excitement. You have hope. Which one do you choose to rule your life?

I pushed off onto the great Golden Gate. All around me was the incredible backdrop of water, sky, and magical city. I felt a rush of excitement, not fear. There was a chain link fence above the guard rail. The pathway alongside the motor traffic was relatively clear. I was Biking the Bridge and enjoying it!

Then the fence disappeared.

All that existed between me and the air was the reddish-orange siderail of the Golden Gate Bridge. More and more pedestrians and bikers began crowding the narrow footpath. I began to slow down until Justin and our group were no longer in sight. Then the super bikers started whizzing through.

Halfway across the Bridge, the wind picked up. My outward focus disintegrated into one of self-preservation. Panic set in and I had to get off and rigidly walk my bike as far away from the railing as I could get. Whatever it took, my only goal was to get myself off that bridge!

Then, in the midst of my high anxiety, I saw Justin. He was riding back towards me with a big smile on his face.

“Are you all right?”

“That’s okay,” he cheered me on. And while I walked my bike, Justin rode next to me, chatting and encouraging me on until we crossed to the other side.

We all need cheerleaders. Whatever fears you face in the coming year, surround yourself with people who will encourage you, pray with you, and ride alongside you.

Remember that hope is the other side of fear.

What we hope for, we often fear losing. But what we fear can be transformed by hope. We choose to live by either hope or fear in life.

There will always be bridges we fear crossing. We learn to cross them, though, when we press on in hope.

“May your choices reflect your hopes, not your fears.”  Nelson Mandela

12 responses to “My Phobia”