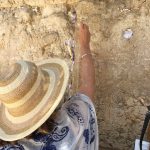 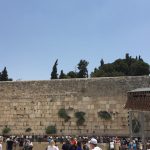 Are you a pilgrim or a tourist?  It’s not something I ever thought about until I went on pilgrimage to Israel earlier this month.  I went because I wanted to see the places where Jesus lived and walked,  to experience firsthand the physical nature of his life and environment.  It was a common desire expressed by many of the fifty-one of us travelling with the joint organisational team of Westmont College and Footstep Ministries.  Not one of us said anything about wanting to be a pilgrim.  Yet, the first thing our leader, David Sparks, said to us was “We are pilgrims, not tourists.”

So, what is a pilgrim?  My only encounter with pilgrims throughout my youth was a bunch of somberly clad people in tall, funny hats who showed up once a year with some Indians around the Thanksgiving table.  It wasn’t until I discovered John Bunyan’s Pilgrim’s Progress that I began to have a different picture of the word.  The pilgrim is Everyman on the journey of life.  For the Christian, this is a journey of faith that begins at the Cross.  It’s not a word that appears in the Bible.  But when Jesus sent out his disciples, he told them to “take no bag for the journey.” (Matt. 10:10).  Tourists require baggage; pilgrims don’t.  To be a pilgrim is to be unencumbered.  The first thing that happens to Christian in Pilgrim’s Progress is the jettisoning of his baggage, his burden, when confronted by the Cross.   Still, I have never really thought of myself as being a pilgrim.  If the Christian life is a pilgrimage, then just about everyone in the Bible who followed God’s commands was a pilgrim.  Even Jesus.  The whole Bible is about pilgrimage, the long journey from the Garden of Eden to the Garden Tomb.  Life for the believer is all about that journey, joining the ongoing stream of committed travellers throughout the ages, and sticking with it no matter how dark and difficult the road becomes.  So, the first thing I do is look at my enormous suitcase and think, “I travel with far too much stuff.  Unburden me, Lord.”

We can be single tourists, but we are not meant to be solitary pilgrims.   Our group quickly became a community as we sang and prayed daily together.  We were a mix of all ages, families and singles, with international backgrounds that included Costa Rica, Egypt, Great Britain, Poland, and South Africa as well as the U.S.  “…all nations will gather in Jerusalem to honour the name of the Lord,” prophesied Jeremiah 3:16.  The real beginning of our “all nations” pilgrimage for me, however, happened in a boat as we crossed the Sea of Galilee.  It was our second day and the Fourth of July.   Without any announcement, the American flag was immediately hoisted as we set sail and the National Anthem had us springing to our feet with hands across our hearts.  So, there waved our star spangled banner next to the blue and white Star of David over the waters where Jesus walked.  What an incredible way to celebrate the birth of a nation!  But it was more than just a heartfelt patriotic moment.  It was about being a people, leaving one shore to reach another, the Children of Israel crossing through the Red Sea, the Mayflower Pilgrims crossing the Atlantic, the countless numbers who have and still are climbing into boats in search of new birth.  Jesus knows our crossings, our yearning for safe havens.  He knows the waters and He calms the storms.  This is where new birth begins, launching out upon the waters of pilgrimage and baptism.  Our Fourth of July began on the waters of Galilee, but ended up in the waters of the Jordan.  We were baptised at the end of our travels that day, one tribe among many nations, all making the journey to Jordan.  The heat was intense (in the 100’s!), so the water was cooling, refreshing, restorative.  Nobody got out.  One by one, we came up from the water in our dripping white robes and sat down together in the Jordan River until every pilgrim had been immersed.   It wasn’t planned.  When you’re in the spirit of pilgrimage, community happens.

God knew that when He called His people to Jerusalem.  They were to come on pilgrimage three times a year (Deut. 16:16) to worship in His Temple.   They still come, only the Temple is no longer there.  All that remains is a wall.  So, they come to the Wall to pray, not to the wall, but through it to where the Temple once stood.  I didn’t expect to be allowed access, but all are invited to come and leave their prayers wedged inside the cracks.  It is a symbolic act for the Christian because Christ, the Lamb of God, has replaced the Temple with his own body and blood.  There is no wall between us and the courts of heaven.   We are called to come daily into His presence whether in Jerusalem or the farthest depths of the earth.  Those who have rejected Christ weep at the Wall for what they have lost; as Christian pilgrims, we rejoice in the love of our Saviour.

I came unprepared for the beauty of Jerusalem.  It is a gleaming oasis surrounded by desert, a former kingdom whose elephant in the room is Palestine.  No wonder Jesus wept over this city.  He foresaw her destruction, the hatred of her people and the walls of division.   My pilgrim heart is saddened as much as it is opened to a profound love for this sacred land as I learn of the suffering that still goes on here in the midst of such beauty and abundance.  A tourist moves unaltered from place to place, but a pilgrim is changed.

What should my response be?  What kind of pilgrim am I?  God’s command to His people coming to Jerusalem was “No man should appear before the Lord empty-handed:  Each of you must bring a gift in proportion to the way the Lord your God has blessed you.”  (Deut. 16:16, 17)   My response then is this–May I continue to journey as a pilgrim in this life, not a mere tourist, that I may not come before the Lord God empty-handed.  Trim me of the burden of excess baggage and fill these hands instead with gifts worthy of Your blessing.

4 responses to “On Pilgrimage”