I went for a walk in the Oregon rain today and got refreshingly drenched.  I am not normally a rain walker; English rain just makes me shiver.  But there’s been a lot to process from the past few weeks and I can highly recommend a brisk walk in the rain for clearing one’s head.  It could be the mountain scenery also has a lot to do with the head clearing process.  Mountains have a lot to do with perspective.

So, I find myself in Oregon, seeking perspective on a week that began with the funeral of a close friend in England and ended with Earth Son’s graduation from college in Santa Barbara.  A lot got packed into that week.  Death and life played off each other in ways that, in retrospect, resonated in Earth Son’s grand college finale– his senior art exhibition.

Entitled simply “Triptych”, we watched him struggle with his ideas for his senior project for most of the year.  He knew he wanted to do a collection of portraits and that he would use his favourite medium, drawing.  But what would they be about?  What would be their significance?  I told him, just start drawing.  The significance will come.

I’m a writer, and I know how easy it is to get so bogged down with the idea of “significance” that you stop writing.  Why bother?  What difference does it make?  It’s all about perspective, how you look at things.  That’s when I need to go rain walking.  It’s lonely sitting there in front of an empty page wondering if it’s worth the effort.  I see it’s going to rain, but I go out anyways.  There are mountains beyond a lake surrounded by trees and my eyes are drawn upwards.  It starts to rain, one drop, then two, and before long, I am walking with wet skin and flattened hair.  But it feels good and words, then sentences start forming out of the jumble in my head.  When I get back and dry off, the words keep flowing, like the rain, onto my empty page.  Those words and sentences connect in other ways, like streams and rivers, with the struggle and meaning of the portraits that became Earth Son’s senior art project when he began “rain walking” through his experiences these past four years of college and finally started drawing.

He began with the Chumash Storyteller, a Native American whose tribal ties to the central Californian coast go back centuries before any European settler arrived on the scene.  When Earth Son first met him, he was drawn to his warmth and humour and invited him to come and tell his stories on the college campus, which he did.

I started calling this son of mine “Earth Son” after his sojourn in New Zealand where the indigenous people, the Maori, taught him to love God’s creation in a new way.  The stories of their own names are carved on their faces so that in time they appear as natural as any wrinkle.  The Maori Craftsman’s face literally tells you who he is.

Earth Son’s love of indigenous people and their connection to their environment and community extended to the marginalised people of Palestine whom he met on his visit to Israel last summer.  They made a deep and lasting impression on him.  His final and central portrait is the Palestinian Mother.  She is old and appears to be blind.  The harshness of her life and her people’s struggle are all too evident in the ancient lines of her face and careworn hand.

Once Earth Son finally began drawing, his love and passion for these people’s stories flowed through him and he rediscovered how powerful art can be.  The portraits reflect stories that are being headlined every day.  The Palestinian Mother remembers the home she had to flee as a girl while her sons and grandsons storm the fences of Gaza.  The Chumash Storyteller preserves the oral traditions of his culture while other Native Americans fight to preserve their water rights to land they can no longer control.  The Maori Craftsman sees his home shattered by earthquake and environmental disaster, and as his people have for generations, with dignity he begins to rebuild his community.

This is where significance lies.  It’s not something that can deliberately be created.  It comes from the doing itself and out of one’s own unique perspective, whether it’s drawing, writing, storytelling, building, raising a family, or just forging ahead with life in the midst of suffering.  Each portrait testifies to the loneliness of the human spirit, but also to the fact that in our differences, we are all made in the image of God.

So, to Earth Son, beloved hijo, I would say that in these portraits, I can see where you’ve been “rain walking” these four years, gaining new perspectives from all the mountains and hills you’ve climbed in different places, and the stories you’ve listened to from the people who live there.  They have entered your heart, and in revealing them to us, they touch our hearts too.

To anyone else, college graduate or otherwise, who may read this momma’s proud tribute, I say the world tells you to believe in yourself, but that’s not the answer to self doubt.  The self is a bottomless pit.  Rather, stay connected to the River of Life and believe that whatever talents you have been gifted with have merit.  In the doing of them, you will find significance, and ultimately the purpose for which God has given them to you. 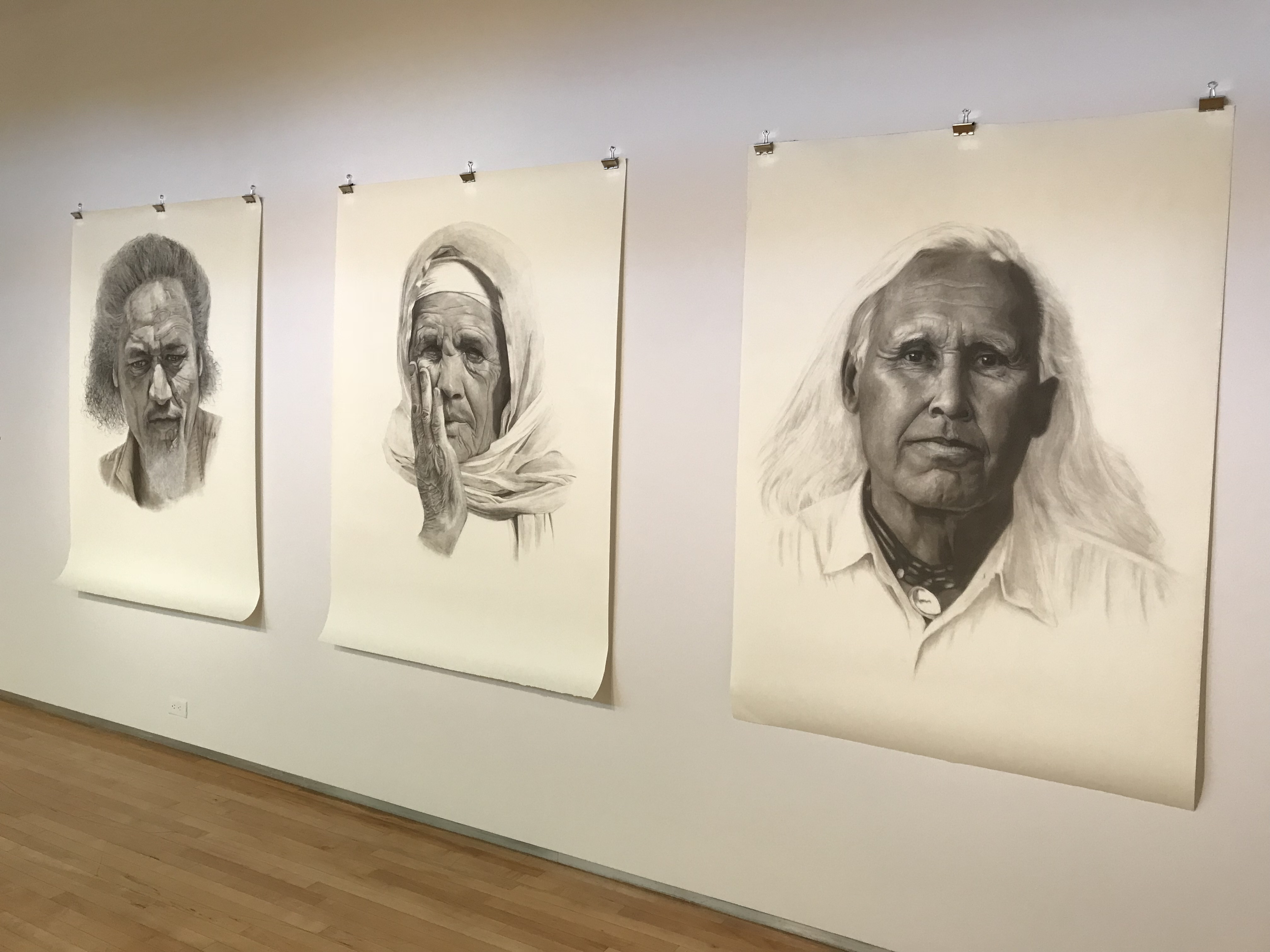