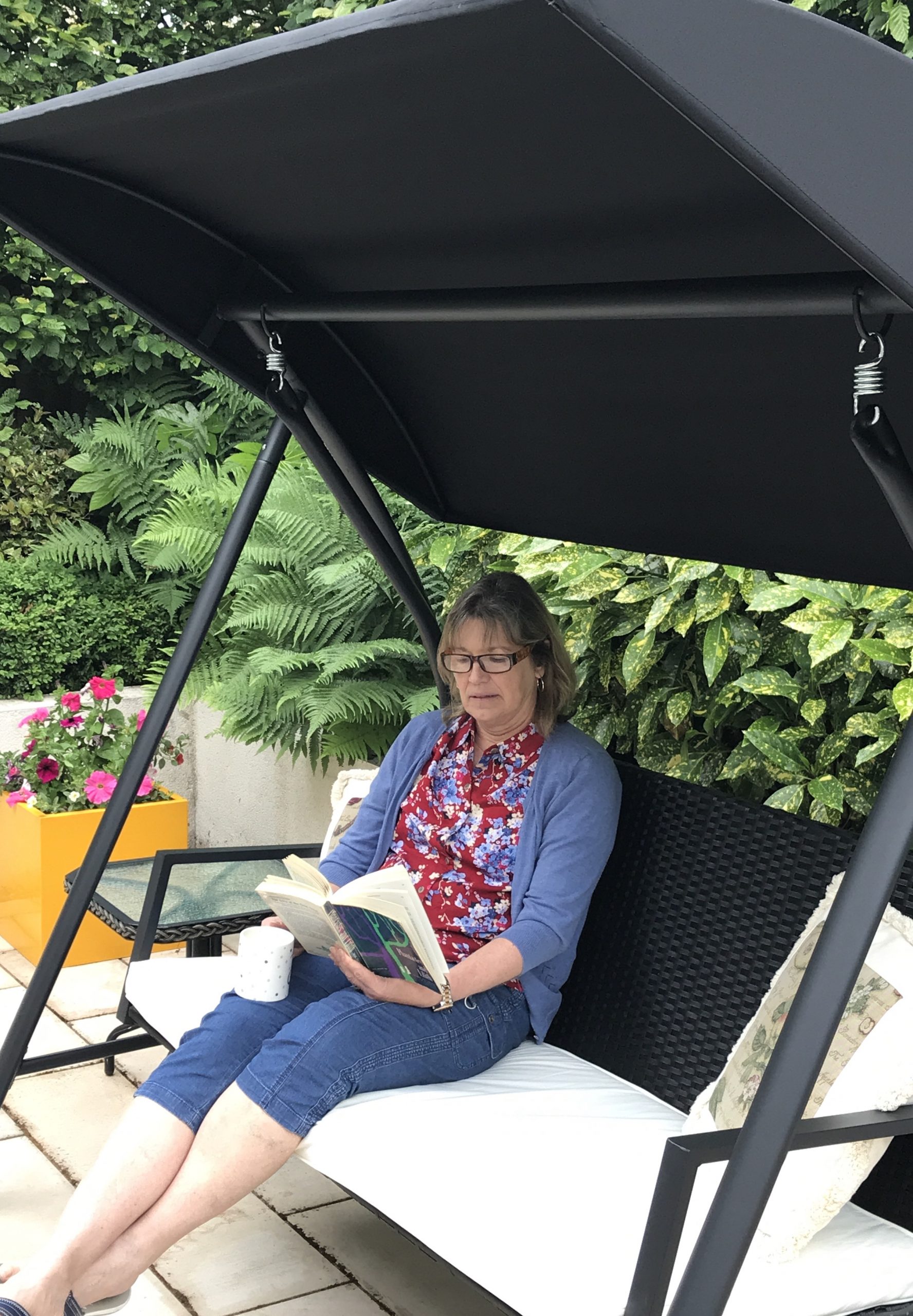 If you made a list of the ten most important books that have shaped your life and why, what would that list tell you?

More than any other time in my life, reading has kept me from sinking emotionally during the overwhelming changes that are happening in our world. (A friend inspired me to install a garden swing on our patio which is the perfect place to escape to for summer reading!)

Apart from the Bible which has been the foundation of my life, I started with the standout books from my childhood and reached my top ten by the time I turned thirty. Every book is considered a literary classic which got me thinking. A definition of a classic is “something that stands the test of time.” Which means a book I read when I was eight still affects me, challenges me, and opens the world to me, although in different ways, fifty-five years later.

Make a list of your Top Ten and find out which books are still speaking to you. Maybe this is the time to revisit a few.

Here are mine (in order of the age in which I first read them):

1. The Island of the Blue Dolphins by Scott O’Dell–Newbery Winner 1961

“Now I was really alone.”

The greatest gift my fourth grade teacher, Mrs. Beecher, gave me was an introduction to this book. Blue Dolphins took me out of the Nancy Drew zone into someplace very different. Based on a true story, a young girl survives alone for eighteen years, growing into womanhood on a small island off the central coast of California in the 1800’s. We read this book in class during the aftermath of the Cuban missile crisis when we Californian schoolchildren had regular air raid drills in which we had to crouch under our desks until the sirens stopped. We were told it was because if a bomb hit Los Angeles, the windows of our classroom might shatter.

The 1960’s was a turbulent decade. As a child, I absorbed the fears of the adult world–the Communist threat, the Watts race riots, the escalating war in Vietnam–fifty-five years on, it would appear not much has changed.

The character Karana in The Island of the Blue Dolphins has become an icon for me of the individual’s ability to not only conquer one’s fears in the face of isolation and adversity, but to also embrace the beauty of life at the same time. O’Dell’s beautifully sculpted prose never fails to uplift me in a story that encourages me to never give up hope.

“Reader, I married him.”

Who doesn’t love the poignant triumph of that famous line? Little Jane of no consequence marries the man she loves, but at a cost. Rochester, her soul equal, is a blind ruin of the man he once was.

I first read Jane Eyre at thirteen and was astonished to discover in all that archaic language a downright thriller. Things are not what they seem at Thornfield. Jane wakes up to hear a demonic laugh breathing through the keyhole of her bedroom door. I’ll never forget the moment I read that scene. Totally creeped me out! I was compelled to read on.

Of course, there is much more to Jane Eyre than the madwoman in the attic. Like Karana in The Island of the Blue Dolphins, Jane must continually rise above her social isolation in a world that has abandoned her. But she does so, over and over again, facing whatever life throws at her with courage and the determination to retain her freedom.

True freedom resides in the spirit. We may not be able to alter our circumstances, but we can choose how we live within them. Jane’s real triumph is that she loves freely, wholly, even when confronted with disaster, because she herself is a free and whole being.

3. A Tale of Two Cities by Charles Dickens

Indeed! Things don’t get much worse than the French Revolution.

I first read this Dickens classic at thirteen (that was an epic year in English class). I remember being amazed that the creator of Oliver Twist and Mr. Scrooge had written an entirely different kind of book.

But if the French Revolution was the worst of times, why was it the best of times?  Enter the unlikely hero, Sydney Carton, who gives his life for the husband of the woman they both love. Why would a man make such a sacrifice? Not because he was such a good man, (he wasn’t), but because he was motivated by something greater than himself.

I had never come across this kind of character or weighted theme outside of the Bible. But Sydney Carton was not Jesus. What Dickens showed me was that in the worst part of ourselves, we are redeemable. When we reach for grace, we are our best selves.

In the midst of these worst of times, I have to keep asking  myself, How can I be my best self? I cannot be it outside of the grace of God, that is certain.

“To love another person is to see the face of God.”

You’ve seen the musical; have you read the book?

In my teens, I was something of a Francophile so anything French caught my attention. (I did not read Les Mis in French, let me add!) The story of an ex-convict trying to make good while an obsessed policeman chases him through the sewers of Paris remains for me one of the best stories of all time.

If you turned Jean Valjean into a black man in America, Les Mis could be a story off the front page of today’s newspapers. This is a story about hatred and revenge, poverty and protest. But above all, Les Miserables is a story about forgiveness and mercy. Because Valjean has been shown mercy, he rebuilds his life by showing mercy to others.

On the other hand, bad cop Javert can’t see beyond his own brutality. He believes the law justifies his view of Valjean as an incorrigible criminal who deserves to be brought down like a hunted animal.

While angry men build barricades in the streets, Valjean’s compassion wages a different kind of revolution. Compassion builds bridges instead of barricades.

What are we building with our lives during this turbulent time? Compassion for the suffering of others comes from knowing suffering ourselves and the lavish nature of forgiveness.

“Thus I, who set out to find my Ideal, came back rejoicing that I had lost my Shadow.”

My best class in college was “Modern Mythology” taught by Dr. Clyde Kilby, a man who had corresponded with the two most famous authors on the syllabus, J.R.R. Tolkien and C.S. Lewis. His class introduced me to their world, opening the door in the wardrobe, as it were, to a different place of being I never knew existed.

The work of Tolkien and Lewis were huge discoveries for me in college. But one book from this class stood out in particular to me, and that was Phantastes by George MacDonald.  C.S. Lewis said it was the book through which he “crossed a great frontier” of faith, not because of any convincing argument, but because “The quality which had enchanted me in his imaginative works turned out to be the quality of the real universe, the divine, magical, terrifying and ecstatic reality in which we all live.”

Phantastes is hard to describe, but as an imaginative fantasy of the journey of the soul, I found great solace in its language and imagery. I was discovering my inner self for the first time and in that turmoil of emotional and spiritual searching, this book gave me a place to land.

There is an end to all things, even Death has its end for the believer. As a college student, I was just looking for a way forward into the future. At this later stage of my life, confronted daily with statistics of those dying from COVID-19 and police brutality around the world, MacDonald’s spiritual vision of the end of life’s journey still offers beauty and reassurance in words reminiscent of the 23rd Psalm–“Surely goodness and mercy shall follow me all the days of my life and I shall dwell in the House of the Lord forever”:

“Yet I know that good is coming to me–that good is always coming; though few have at all times the simplicity and the courage to believe it.” –George MacDonald

To Be Continued: Part Two from the Garden Swing!

2 responses to ““The Best of Times; The Worst of Times”—-Ten Classic Reads to Help You Stand the Test of Our Times”