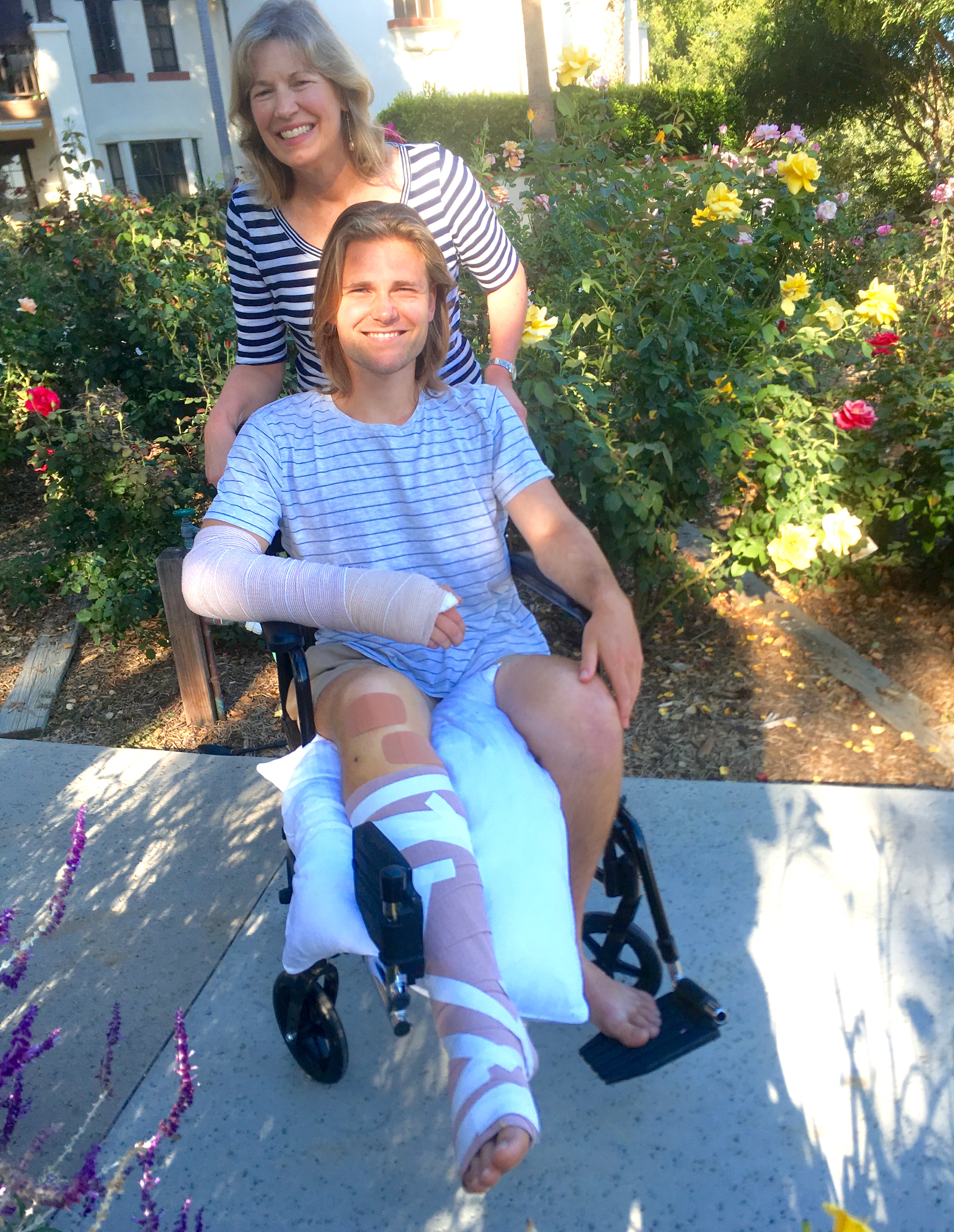 Of all the things you worry about happening to your child–car crashes on the freeway, acts of terrorism, disappearing into the blue–being hit by a car in the middle of a crosswalk isn’t one of them.  He wasn’t doing anything foolish.  He wasn’t being reckless. He wasn’t climbing mountains or diving off rocks.  He was jogging across the road.

Earth Son is 5,000 miles away in Santa Barbara, California.  At least he’s not in New Zealand.  I will need to book a flight and get to him as soon as possible.  I can’t believe it.  I just got back two weeks ago from Baby Girl’s graduation in North Carolina.  Now this.

What do you do first?  Chris and I go downstairs and make tea.  That great soother of nerves cannot be underestimated in times like these.  For some, it’s strong, black coffee.  But coffee doesn’t calm the soul like a perfectly brewed cup of tea.  People drink their coffee on the go, using it to charge up, head out, and get the day cranking.

Tea is meant to calm, to instil order where chaos reigns.  And so the rescue of Earth Son begins with a cup of tea, slowly sipped while our thoughts slip gradually into place.  Our boy is fine.  There are no head injuries.  His body will recover, thank you, Lord!  It could have been so, so much worse.

So, here I sit now, drinking tea with Earth Son in Santa Barbara, conversing about life and gardens and finding one’s place in life.  He was having such a happy summer, working as an intern for the Westmont College dining room vegetable garden, learning sustainable ways of growing food, starting a bee colony, building a chicken coop.  The earth is a part of us, where we come from in the order of creation, and yet, we have learned so little about how to take care of it.  Instead, we chase after things whose origins we seldom consider.

Then, an accident happens, and there is much to consider–insurance, police reports, wheelchair accessibility–an entire previously invisible world becomes acutely visible.  This is how we have to restore order to chaos, through forms and files and interviews and X-rays and wheelchair ramps.  It’s bewildering and at times, overwhelming.  I find myself fighting off a panic attack in the middle of town.  I didn’t expect to feel so vulnerable.  It’s a feeling close to grief, understanding how temporal our earthly bodies are, how close we are to loss.

My bright-eyed boy buoys me up.  He is young and fit and not at all discouraged that he can’t work in the garden or ride his bike or even walk.  He knows this too is only temporary, that loss is something the Heavenly Father either restores or transforms into something greater than ourselves when we hand our lives over to Him.  Only He can fully bring order to our chaos, take the dust we are made of and make our brokenness whole again.

Earth Son’s words stay with me, “God lifted me up and laid me down in the grass.”  It is exactly what God does, whatever happens to us.  He lifts us up in His arms and puts us down again in a good place, close to His heart in green pastures.

“For he will command his angels concerning you to guard you in all your ways; they will lift you up in their hands, so that you will not strike your foot against a stone.”  Ps. 91:11,12

One response to “The Rescue of Earth Son”